We suggest you to view all the video lessons before the Live “Directed Learning Session” of Dr. Brodbelt (December 11th, from 10 a.m to 1 p.m CET)

Eva Abarca
DVM, Dipl. ACVO Relatore
Eva Abarca obtained her DVM degree from the Veterinary College at the University of Zaragoza, Spain, in 1997. She completed an American College of Veterinary Ophthalmologists (ACVO) residency program and a Master's degree, becoming a Diplomate of the ACVO in 2012. From 2011 to 2013, she worked as an Ophthalmology Research Scholar in the Laboratory of Ocular Immunology, Toxicology, and Drug Delivery at North Carolina State University, USA. From 2013-2016 she was Assistant Professor in Ophthalmology at the College of Veterinary Medicine, Auburn University, AL, USA. In 2016, she moved back to Europe and joined the Ophthalmology Service at Vetsuisse Fakultat, Bern University, Switzerland, as a Senior Clinician. In 2018 Eva joined the Ophthalmology service at Ars Veterinaria Veterinary Hospital in Barcelona, Spain. Her interests include the study of methods of sustained ocular drug release for the treatment of keratomycosis, as well as ex-vivo models to study ocular pharmacology.

David Brodbelt
MA, VetMB, PhD, DVA, Dipl. ECVAA, MRCVS Relatore
Dave Brodbelt graduated from the Cambridge Vet School in 1993 and undertook a residency in Veterinary Anaesthesia there. In 1998 he gained the RCVS Diploma in Veterinary Anaesthesia and became a Diplomate of the European College of Veterinary Anaesthesia and Analgesia. He then went into private practice for 4 years prior to undertaking an Epidemiology PhD based at the Epidemiology Unit of the Animal Health Trust / Royal Veterinary College looking at anaesthetic complications in practice (CEPSAF). Since 2005 he has worked at the RVC within the Veterinary Epidemiology, Economics and Public Health (VEEPH) Group, initially as Lecturer in Veterinary Anaesthesia, and then Lecturer and Senior Lecturer in Companion Animal Epidemiology, before becoming Professor of Evidence based Veterinary Medicine (EBVM). He is involved in research and teaching epidemiology, statistics and EBVM to undergraduates and postgraduates. His research interests focus on practice based research and research derived from electronic health records. He is a member of the VeNom Coding Group, part of the VetXML consortium and is co-project leader of VetCompass, the RVC based initiative that works with a large group of collaborating first opinion practices surveying disease trends in veterinary practice.

Christine Watté
DVM, CertVOphthal, Dipl. ECVO Relatore
Christine received her veterinary degree from the University of Liège in Belgium. Following a brief period in private practice she performed a rotating internship at the same university. In 1997 she enrolled in a residency training programme in veterinary ophthalmology at the Royal Veterinary College, University of London, UK, and subsequently stayed on as a staff ophthalmologist. In 2001 she moved to the United States to perform her post-doctoral research at the Schepens Eye Research Institute, Harvard Medical School, Boston, where she worked in the field of ocular immunology. Her work focused on cellular interactions during the establishment of Anterior Chamber Associated Immune Deviation and its clinical applications. Since 2009 Christine has been on the faculty at the University of Bern, Switzerland, where she now leads the ophthalmology department. Christine has been attributed the Cora Verhagen Award for her contributions in Ocular Immunology. She is a member of the ECVO Education and Residency Committee since 2010 and has chaired this Committee from 2013 to 2017.

Total duration of the first module 26 hours and 44 minutes.
We suggest you to view all the video lessons before the Live "Directed Learning Session" of Dr. Brodbelt (December 11th, from 10 a.m to 1 p.m CET)

DO YOU HAVE ANY DOUBTS OR QUESTIONS?
After completing the online video-lessons viewing, send us via e-mail (segreteria@unisvet.it) a list of questions you want to ask the speakers.
Each of them will be glad to clarify any doubts and respond to your queries in a few days, which will be gathered and put together in a list of FAQs that we'll send to all of you. 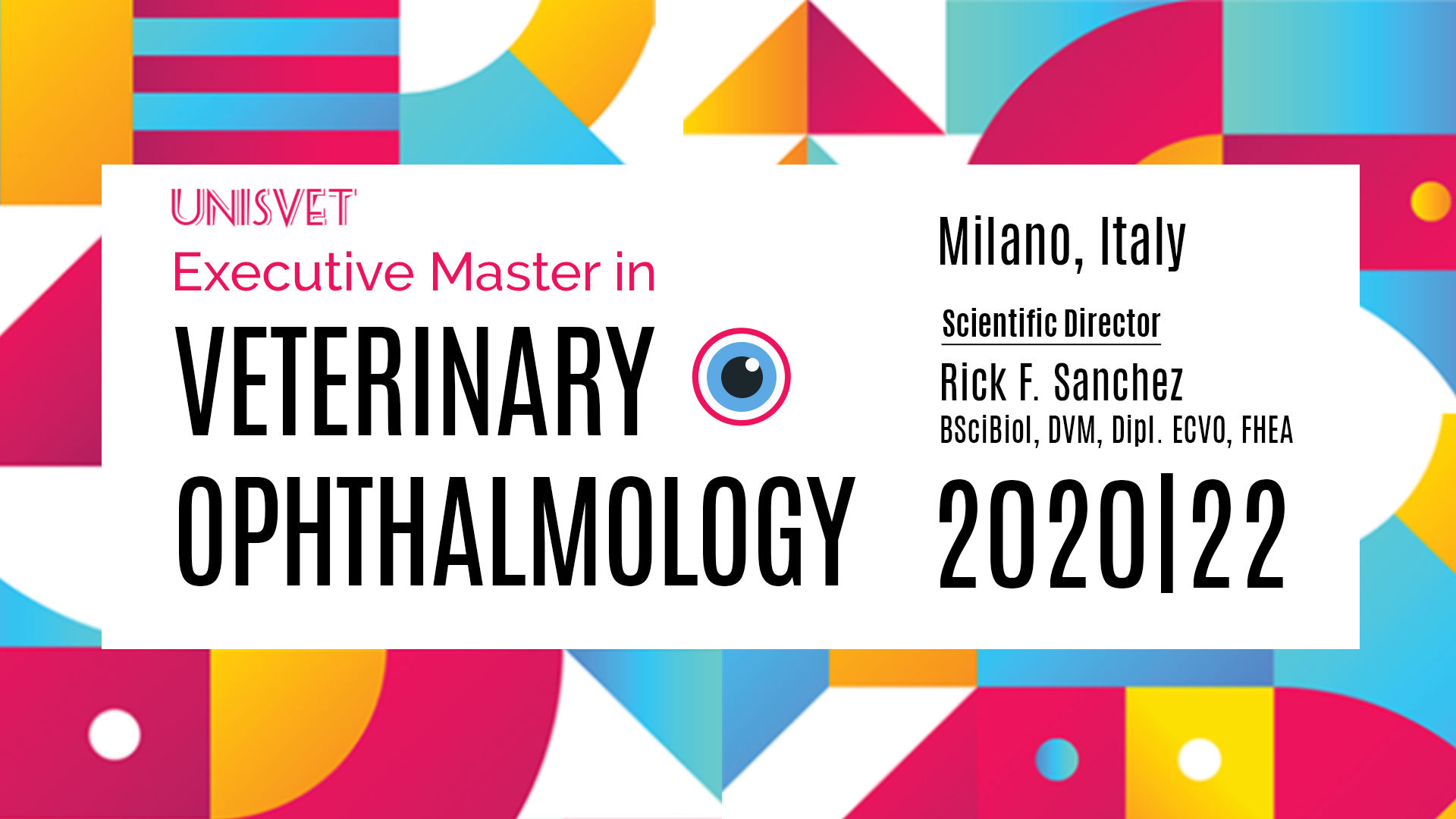